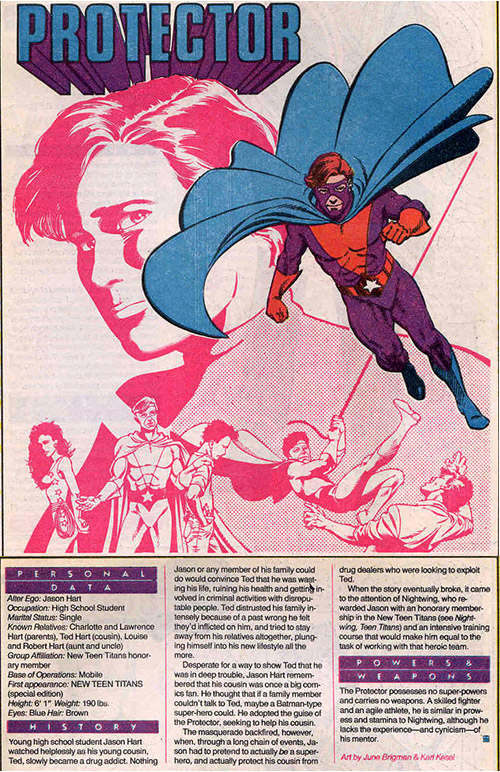 The facts: Here's the deal. In 1983, DC came out with three New Teen Titans specials meant to boost drug abuse awareness as part of the President's Drug Awareness Program (a letter by Nancy "Just Say No!" Reagan opens each issue). The book was sponsored by Keebler, but Robin was at the time licensed by Nabisco so the Protector (Jason Hart) created by Marv Wolfman and George Perez was used as a substitute. The anti-drug animated TV ad that coincided with this campaign also couldn't use Robin, who was otherwise a member of the Super-Friends (in case the Titans tested well enough to go to series). The Protector appeared in all three "drug issues", and almost nowhere else. This issue of Who's Who Update confirms he was a member of the team at some point, though fans wouldn't be blamed for mistrusting his canonicity.
How you could have heard of him: He's had silent cameos in Teen Titans Secret Files #2 and the Infinite Crisis collection, but his biggest roles have been outside canon. He turned out to be one of Diah H-er Robby Reed's identities in Teen Titans Go #52 (a reappearance in #55 goes unexplained, however), and appeared besides in Tiny Titans #46, amusingly, as Robin's replacement.
Example story: The New Teen Titans "Drug Awareness" #2 (1983) "Battle!" by Marv Wolfman, Ross Andru and Joe Giella 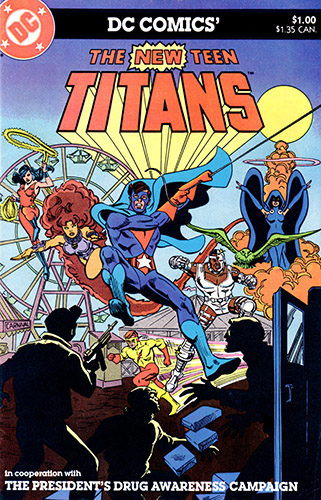 What, no Perez beyond the cover?! Sorry, folks, but Perez only drew the first issue, which is also the one where the Protector has the least to do! He's a big part of #1 and #3 though. Not that Ross Andru isn't a fine fit. The story is called "Battle!" because the Reagan White House has framed the issue as a "War" on drugs. Plus, superheroes, punching, etc.; it just makes sense. In the DCU as such, the Protector is no obscure hero, at least not in his region. The drug scene knows him. 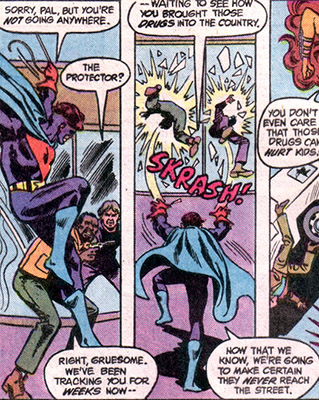 And he's no straight replacement for Robin either. Robin was a member of the Titans. The Protector seems to be a guy they hang around with so they can deliver as much exposition as they can about the dangers of drugs. See? He's treated as separate from the Titans. But then, this is a very personal mission to him. I wouldn't be surprised if he's a major advocate for drug awareness in the DCU, and that all those "just say no" poses are part of an in-universe ad campaign. He's high profile, like say, Booster Gold would be, but not on anyone's call sheet when the Anti-Monitor comes to town. The Who's Who entry is actually pretty fun, because it extrapolates an origin story for him based on what small evidence we see here. He DOES have a cousin who ruined his life with drugs (the soft stuff acting as a gateway to the hard stuff, of course), and who is now trying to piece his life back together. And we don't know that he necessarily was a comics fan, but we do see him go see a Superman movie TWICE with the same date. So superhero fan, yeah, probably. That's as good a reason as any to put on spandex. Probably more legitimate than a lot of heroes. The cousin, Ted Hart, has just moved to Blue Valley, Kid-Flash's home town, so Protector asks Wally to keep an eye on him. 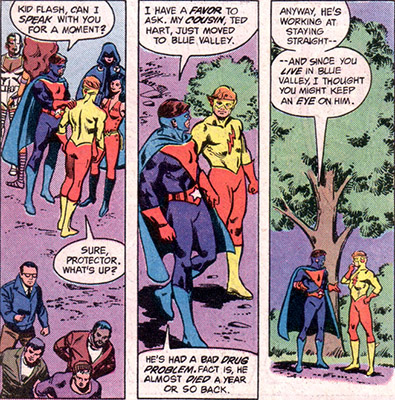 While we cut back to the Protector beating on different links in the drug chain (with or without the Titans), the story then becomes about Ted, doing his best to stay clean, but eventually succumbing to peer pressure and rapidly spiraling out of control. That's when the Protector and a rather clueless Kid-Flash confront Ted with the power of MEDICAL FACTS! 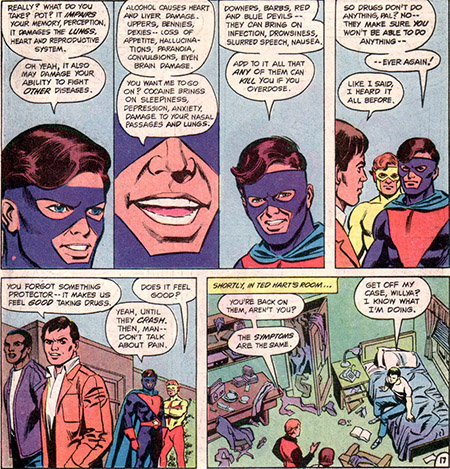 Come on, Wally. Have you NO CLUE as to what the attraction is? I mean, I'm a complete straight arrow, and even I know what's what. Speaking of arrows, maybe you should give Speedy a call. Has he never discussed this with you? (He will, he's a major part of the second issue.) Anyway, having not heeded the Protector's words, Ted soon finds himself snorting coke off a bathroom floor. SCARED STRAIGHT YET?! How about when he and his bad influence/friend Brian turn to violent crime and try to rob a store? THAT'S WHERE YOU'RE HEADED, JUNKIE! Friend is shot when the clerk pulls a gun, and the drug-addled Ted runs off to his clean girlfriend's place where he collapses. Raven senses pain and teleports them both to the hospital, where we can cue the sort of happy ending: 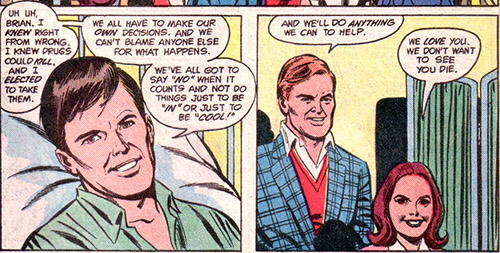 Ted smiles a lot for someone who's had troubles. Maybe he's being mind-controlled by his mom, who's apparently possessed by Trigon. Brrr. Well, it's nice of the families and girlfriends to stand behind Ted and Brian, because it's true, addiction is a sickness. So there's a lesson there too. One of many. 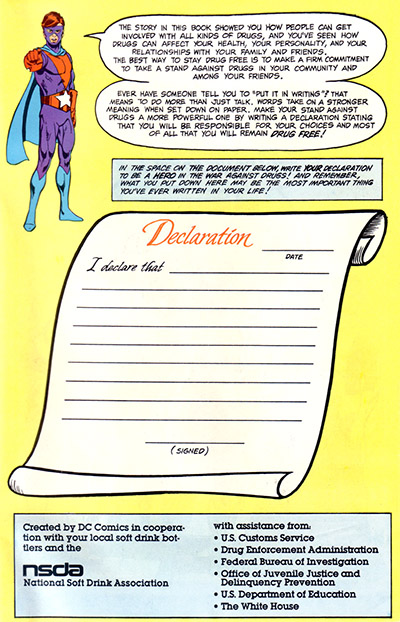 It's true that these issues can feel like unrelenting sermons about the topic, and that they focus on worst case scenarios that border on the melodramatic. Does that mean they don't work? I didn't read this at the time, but mainstream superheroes have always treated drugs as bad. Batman would always bring a pusher to justice, never buy a joint from him. In the clear morality of comics (before the mid-80s, at least), there was no question. That's as good a reason as any for me to never have touched the stuff. Drug Awareness issues like this probably over-egg the pudding, but the heroes' motivations are justified, and the necessary evil of replacing Robin with a different character actually allows Wolfman to create a hero dedicated to this idea. It makes sense, and doesn't feel as forced as many PSA comics do.

Makes me think Jason Hart would be an interesting Titan to include in an official line-up. He would be the guy who'd have a very personal agenda, who'd drag the Titans into things they might not normally handle, and feel frustrated when taken away from his fight. The other Titans might even consider him holier-than-thou, leading to an interesting dynamic.

Who's Next? Moving on to the next issue... and beyonnnnnnd!
Comics Teen Titans Who's This?