RPG Talk: What Did We Miss? 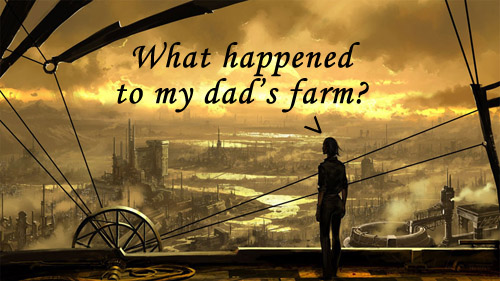 Just came back from a weekend road trip to Prince Edward Island (a province so close, it was pretty ridiculous I'd never been before), and now I'm struggling to catch up to the news I've missed during even that short stay. The usual political stuff, news out of ComiCon, etc. So I started thinking about all those nomadic role-playing campaigns...

What happens when your adventurers come home?

I think usually, the party comes back as heroes and THEY're the ones with stories to tell. It probably makes sense in many settings, where the peaceful hamlet life is unbroken by anything more than country gossip the players aren't really that interested in. Just local color, really. The Osworth girl got married to the Bumpkin boy. Mrs. Slimpton had a sixth child. We're expecting a good harvest. That kind of thing.

The other common trope is to have the adventurers come back and have to go into hero mode immediately, because their home has been invaded by some ruthless overlord or other threat. In a series of connected adventures, the only reason to return home is, in fact, to have another adventure, where the stakes are more personal.

But that all assumes a certain genre, time period and set of circumstances. In a modern or futuristic world, you may never really be out of touch with news from home, but at the same time, change comes more quickly and all it takes is one major event while the characters were in another country/camping in a haunted house/in another dimension/gunning through hyperspace for their home setting to be topsy-turvy when they return. "What have we missed?" is a great trick to pull, then, for campaigns with a home base the group consistently returns to.

Essentially, this trick can be pulled to update the setting in a meaningful way. Your Ghostbusters are called upstate to deal with a haunting, and when they return, New York has voted a city ordinance that has a major impact on their business. Your starship returns home to find a treaty has been signed with former enemies. A new leader, a new craze, a newly discovered resource, all sorts of changes can impact the home town/realm/world forcing the players and their characters to play catch-up, and perhaps even turn "home" into a place rife for adventure. Why go on another long trip when your home town has been turned into a major center because of the gold rush? The adventure comes to YOU, and a place you thought you knew has become something to explore again.

There are extreme ways of playing this: Time travel changes the timeline and slightly updates your history and reality. The warp space kerfuffle or general relativity make you return decades or centuries later than anticipated. Etc. But even a weekend away can be justification enough for the GM to change key elements of a setting to inject adventure into it, fix what wasn't working (cyberdecking never worked for you? have the corp make a massive software update that changes everything), or just simulate our own organically evolving world in the game.

We shouldn't be afraid of change. As GMs, we should try to provoke it.
Advice RPGs