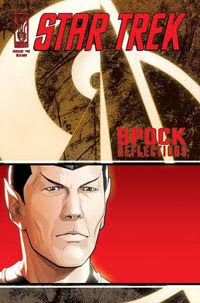 PLOT: Conversation with a talkative passenger causes Spock to reflect on his part. He recalls returning to the Enterprise purged of emotion and seeing Dr. Christine Chapel for the first time since he'd left, and a mission aboard Pike's Enterprise in which he was almost killed when he fell through a small, man-made wormhole. We discover he's returning to Earth on a message from Picard about an old friend that has returned, but died...

CONTINUITY: Chapel had become a doctor by The Motion Picture. Spock's early Enterprise days flashback features Pike and Tyler (The Cage). Pike reported to Commodore Mendez (The Menagerie) back then.

PANEL OF THE DAY - The Spot?

REVIEW: With the short Pike-related story, we finally get an action plot, flimsy though it is. Not that I need action from a series called Reflections, and indeed, the quiet bit between Spock and Chapel was the stronger piece of the issue for me. As for the "old friend" Spock is talking about, it sounds like it should be Kirk, but that's only true if it took about a year for the message to get to Romulus. Entirely possible, and seeing Spock at Kirk's second funeral would be a significant place to end the mini.
Comics Star Trek