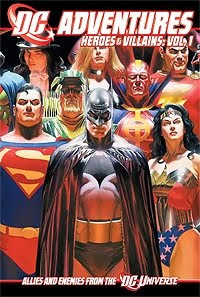 In the past couple years, I've taken interest in two role-playing games based on licenses I enjoy. One of these, Doctor Who: Adventures in Time and Space (Cubicle 7) has had all its products delayed by 11th Doctor rebranding, leading many to lose confidence in the game. The other, Green Ronin's DC Adventures (based on Mutants & Masterminds) looks to be going down the same road. The much-awaited Heroes & Villains volumes 1 and 2 were both supposed to come out last year, and only volume 1 has seen the light of day, albeit only as a pdf document for now (released late June). When DC's promised Who's Who failed to come out, I at least had the satisfaction of knowing that DCAdv would fulfill my need for a compilation of DC characters.

And now, even though Volume 1 should turn up in hardcover soon, I have to wonder what kind of enthusiasm the game designers will put into volume 2 and the equally announced "DC Universe" book when that universe is about to be rebooted. DC has just made Green Ronin's job a lot more difficult. How do you sell RPG background material that has suddenly become almost all out of date? Do players coming into the game want to play in the so-called "old DCU"? Will changes to at least some of the products cause even more delays? And if volume 2 does suffer NuDCU changes, how will those mesh with volume 1? The eleventh hour decision to reboot the DCU (which looks more and more like corporate interference to get DC movies to somehow compete with Marvel's momentum in that area) has really made a mess of things for license holders. Is that any way to do business?

Green Ronin would do well to discuss THEIR DC universe as a trampoline from which players can continue the story of pre-Flushpoint Earth without fear of new events changing the world or the characters. Not that their license is likely to allow them to have any fun witht he idea, of course. While I went on record saying that DWAITAS' delays didn't really bother me, I can't say the same of DC Adventures'. Why? Because DWAITAS is a supremely low-grit system where people and threats are easy to stat out in a small amount of time (even on the fly). Not so with DCAdv's system. Character creation is quite complex and detailed, making a splatbooks of heroes and villains extremely useful, not just as usable PCs and NPCs, but as examples on how to reproduce certain powers and tropes. It was one of the more important factors that shut down my attempt at a campaign last year, a campaign that's harder and harder to resurrect as the game's setting is about to be thrown into chaos.
Flushpoint RPGs

Rhetorical Gamer said…
At the time of the original release of DC, I was a customer who was REALLY excited about Green Ronin having the license to the game.

After the release of the Hero's Handbook and seeing the way the DC characters were being handled (that is, the "iconic" versions) I was disappointed then for a similar reason to why you are disappointed now.

The characters in the game and in H&V I are all over the place in their abilities and their time-frame in the history of the DCU.

I gave H&V I a chance by buying the PDF but having seen it -- I'm not bothering with H&V 2 because I've realized I'd have to re-stat all the characters I wanted anyway.

On the other note... I do think that DC kinda sucker-punched GR with Flashpoint and the Reboot. It is an inexplicable move on the part of DC. I just don't get it... but, to be on topic -- I am happy to play in the "old" DCU because I'm not really interested in the New DCU.
July 27, 2011 at 3:57 PM

Siskoid said…
Note that to avoid current developments in my DC games, I used to set them in the mid-80s, even taking part in the era's crossovers (Legends, Millenium, Invasion, etc.). It's easier to plan out a series when you already know the layout of the setting for the next 25 years.
July 27, 2011 at 4:04 PM

Anonymous said…
Its a shame DC is abandoning the notion of an iconic approach to comics. I don't think tchange will solve their lack of sales. Better and more consistent writing and making sure the books are out on time will.

Some of the biggest mistakes made by DC are the fact that the follow up to 52 was Countdown to Final Crisis, which seemed to lack any idea what Final Crisis was. So we had a disconnect continuity-wise. Not to mention the delays with the Johns-Donner Superman stuff. Or the fact that the Superman-Batman title was claimed to be out of continuity post Loeb...

I could go on.. it seems the guys in control of DC do not know what they are doing and they can whip up all the spectacle they want- without any substance they will ultimately fail.

I think a better way to attract new readers ( for real ) is perhaps to produce low cost comic books printed on news print- cheap stuff printed with shitty ink. Like the rags we see at the end of the conveyer belts at shoprite. Make them 50¢ like the old days and make sure the point isn't to put them in zip lock bags with backing boards in order to preserve the value...