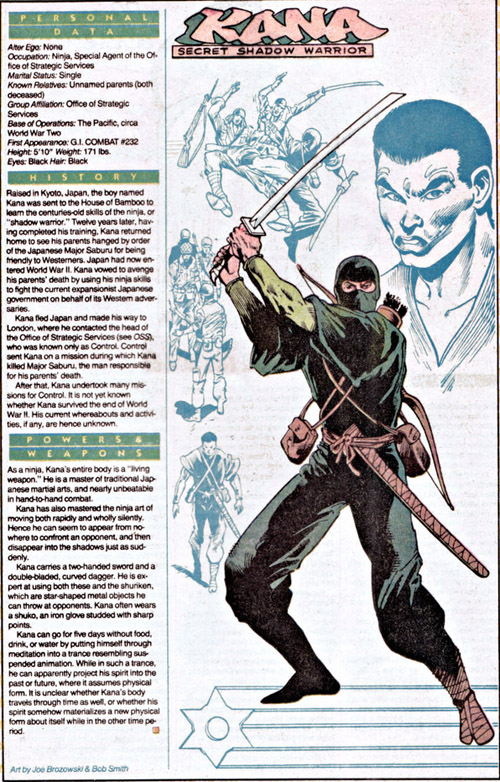 One of the most intriguing aspects of the character, if you look at his Who's Who entry, specifically the last paragraph of the Powers section, is this strange ability to place himself into a trance and effectively time travel! Not something you expect from a WWII strip! And the issue I chose to cover is the third part of just such a time travel story. In the previous chapters, Kana was implanted in a unit that got its commander captured during a battle with the Japanese. Is Kana a double-agent? He's not. After the battle, he seeks inspiration the ninjutsu way, by falling into one of those trances, traveling to 7th-century feudal Japan. I don't think that's particularly accurate, but then this is a story where the ninja code involves fighting evil, so...

By the end of the second chapter, Kana had gotten involved in the historical events recounted above and found himself awaiting death in a cage of netting swinging over a cliff. Full points for wanting to see this adventure through; he might just have meditated himself back to the 1943. The next day at dawn, a dragon kite flies towards him, one carrying Prince Sochi, the true Shogun on Kyoto, feeling guilty about believing the evil Daibu and acting against Kana. The escape via kite doesn't quite work when the rope snaps and the makeshift glider threatens to crash into the sea. With no time to spare (because the Prince's sister will soon commit hara-kiri rather than marry Daibu), Kana teaches the Prince a ninja trick: 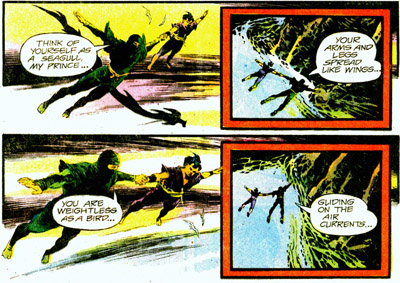 I've got to try that next time I'm in freefall. Kana kills the bad guy and refusing all rewards (he can't bring them with him), he meditates himself back to the present. 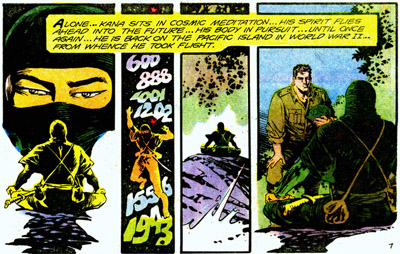 In 1943, his unit has been sending patrols to try and get their commander back, without success. Kana has a plan, inspired by his time in the past. How he makes a dragon kite, I can't tell you, but he soon drops down on the Japanese camp where Commander Ericson is about to get executed. The Japanese soldiers quickly shoot it down, but Kana's fine. NINJA! 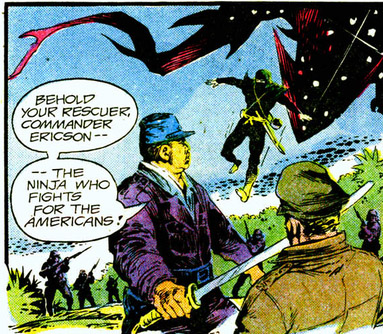 Lest Ericson get summarily killed, Kana agrees to drop his weapons and put his arms behind his back. There's some parlay, and then the fallen kite just EXPLODES and Kana uses the diversion to basically kick everyone's asses.

It was all timed too:

Kana's got a tiny case of OCD, doesn't he? After apologies are handed out by anyone who didn't trust him because of his heritage, he's back to meditating, perhaps having adventures in other times. In fact, his very last story had him going to a postapocalypse future. I'd say this was a little too crazy, but G.I. Combat's lead feature was about a haunted tank so...

Who else? We're going way back to the real 1940s for the next one!
Comics Who's This?

American Hawkman said…
I have stronger feelings about Kana than I do most major world religions, so I am glad to see him get the Who's This treatment. You'd think a time-travelling mystic ninja would have been more successful at DC.
September 4, 2013 at 8:04 AM

Maybe Booster Gold and Rip Hunter can partner with him somewhere down the line and under the New52.
September 4, 2013 at 11:27 AM

American Hawkman said…
I still want to see him meet up with the so-called last ninjas master that trained Manhunter.
September 4, 2013 at 4:50 PM

American Hawkman said…
You have no idea, man. I've been using Kana as a supporting character mentoring a player character in my DC Heroes RPG campaign for about ten years now. :)
September 5, 2013 at 7:59 AM

By the way, as a fellow DCH adept, I've got something for you specifically coming next Monday!