September 24, 2012
On the occasion of completing reviews on the 1971 season of Doctor Who, I should like to re-imagine it as a role-playing game campaign using Cubicle 7's Doctor Who RPG. (Go back one, to Season 7) 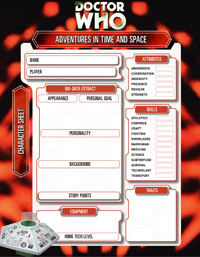 The GM
It's Terry's second season and he feels like he's only just warming up. This time around, he plans to have one more story (as requested by his players), and to finally allow the Doctor to leave Earth on a limited basis, working up to the day when the Time Lords lift his exile entirely. He's also had to replace the companion, and asked around until he found the right person, but in the process, came across OTHER people who wanted to play. Terry obliged two other players, one of them in a most unusual role. See below...

The Characters
-Jon isn't planning on doing anything different with his Doctor this season, except work on his chemistry with the other players, three of which are new to the game. He IS hoping to fiddle around with his store of gadgets, particularly Bessie, using the car's Story Points to give it more options. Favorite Skill: Transport.
-The new companion player is Katy and she's designed a somewhat flighty and clumsy UNIT agent with a heart of gold and some ability in Subterfuge. She and Jon (or rather their characters) quickly click in a kind of father-daughter way.
-The other returning player is Nick as the Brigadier, and having played conflict with the Doctor for a whole season is ready to keep it more in the background. The GM's told him about his plans to take the campaign off-Earth where UNIT would not tread, and he's fine with sitting out if he can still come and watch on occasion.
-Oh yeah and there's John as Benton, who hopes to be a little more active this season.
-Except he's got competition in the shape of Richard's UNIT Captain, Mike Yates, an action hero made to order (and designed with a higher rank too, wouldn't you know it?). Yates fancies himself a ladies' man as well, so Katy makes Jo noticeably nicer to Benton.
-And then there's Roger who's come on not as a hero, but as a villain! He and Terry have come up with this idea for a recurring antagonist, a Time Lord called the Master (with Hypnosis powers, naturally), who would work WITH the GM's prepared threats against the Doctor. As it turned out, this made the villain just as vulnerable to the GM's machinations (or bad dice rolls), lacing both sides of the eternal struggle with uncertainty. And by making his character an old friend of the Doctor's, he's got incentive to sometimes collaborate with him and turn hero momentarily.

Terror of the Autons. Terry starts the season with a returning foe, the Autons from the previous season's first game, but with lots of new tricks up their sleeve. This way, he doesn't have to work too hard at introducing the threat, leaving plenty of room for the new players to integrate themselves into the game. A side-effect of having a villainous player is that the plot logic sometimes goes out the window (two people are orchestrating the nefarious plot, instead of just the GM), but it's part of the crazy anything goes philosophy of the Doctor Who RPG. When Jon steals a part of the Master's TARDIS, the GM has to sidestep the potentially campaign-destroying move by deciding that TARDIS is more advanced and not compatible with the Doctor's own. Phew! 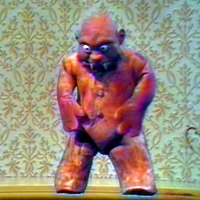 The Mind of Evil. Here's how it works. The GM and the Master's player discuss the plot beforehand, and Roger is allowed to strategize up to a point, laying the groundwork for the adventure. The other players don't know this, and believe the previous scenario was a one-off with a villainous PC, starting this next adventure without him. But eventually, he's revealed to be behind it and shows up to play the rest of the story's chapters. (The players eventually clue in that he'll ALWAYS show up.) The Mind of Evil is less comic-book than Terror of the Autons, so here the GM is trying for something a little closer to a thriller, with a prison, a peace conference and a missile to dispose of. These are threats the UNIT boys can more easily get their teeth into.

The Claws of Axos. Terry goes weird with this story of a biological ship-creature trying to adsorb the Earth's energy, with Adonis-like ambassadors and tentacle monsters acting as its envoys. He introduces an American agent called Bill Filer who is a good example of catering to the villain PC (Filer hunts him), but it may be one ball too many to keep in the air, so he doesn't use him again. To make the game as weird as its premise, Terry shines a torch through a lava lamp, casting all sorts of weird shadows in the gaming room. At least one player mentions a headache coming on. And once again, the GM uses his veto on the Doctor finding a way to use his TARDIS, this time adding the concept of an automatic recall installed by the Time Lords. Phew! 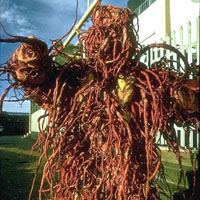 Colony in Space. Ok, it's time to let the Doctor and Jo have an adventure in space and time, but the GM stays in control (or rather, the Time Lords do). It's a kind of western on a colony planet, with the UNIT gang staying home for those sessions (Nick shows up in the first and last parts as an observer, so he puts in a scene). And this time, the players ARE surprised to see Roger show up along the way. Oh that Master, he's everywhere and everywhen! Not the most original of scenarios, but Terry really doesn't have much experience with away missions at this point. He's too used to thinking in terms of Earthbound UNIT stories. 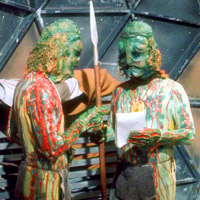 The Daemons. The season finale is an attempt at something new - Gothic horror with a science fiction twist. It works so well, it'll become one of the tried and tested ways of writing Doctor Who scenarios, and there's plenty of inspiration in other media to go around. The Daemons is all about faux-Satanism, ancient aliens taken for gods and devils, and a creepy horror atmosphere. For once, Benton is the action hero more so than Yates, and the GM even gives him a little romantic subplot with the local white witch (just attention, you realize, nothing more). And at the end, the heroes pool their remaining Story Points and manage to capture the Master! Roger is agreeable as this is the season finale, and who knows if he can come back (he and the GM are still playing it close to the vest on that one). 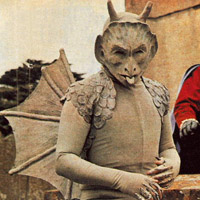 BOK THE GARGOYLE
Attributes: Awareness 2, Coordination 4, Ingenuity 1, Presence 1, Resolve 2, Strength 5
Skills: Athletics 2, Fighting 1, Marksman 2, Subterfuge 2
Traits: Alien; Alien Appearance, Armor [10 points], Natural Weapon/Eldritch Flash [4/L/L], Networked (with its controller), Special: It may use a Daemon's energy to rebuild itself within moments of being destroyed; Dependency/Daemons (Major; Gargoyles are only animated by the power of a Daemon), Enslaved (usually to a Daemon, but someone with a powerful Presence can take control), Phobia (iron). Story Points: 6
Home Tech Level: N/A

Everyone WILL return for the next season. This group really gets along and is having a grand time, whether they have a big role to play or a small one. As for the Master experiment, it worked out well in great part because the group likes Roger so much. Objectively, it's screwed up some plots, and as a PC, he doesn't quite get to be as evil or powerful as an NPC probably would. Still, it's about having fun and being entertained, not realism, right?
Doctor Who RPGs Seasons of DWAITAS

Siskoid said…
It uses the twin powers of hindsight and complete fabrication.
September 24, 2012 at 4:14 PM

Craig Oxbrow said…
Also, the legendarily kiddie-terrifying Auton troll doll could perhaps have a higher Fear Factor...
September 25, 2012 at 1:31 AM