July 02, 2013
On the occasion of completing reviews on the 1982 season of Doctor Who, I should like to re-imagine it as a role-playing game campaign using Cubicle 7's Doctor Who RPG. (Go back one, to Season 18.) 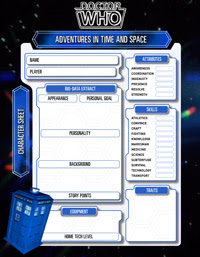 The GMs
Mild snafu at the start of a season in need of a new GameMaster - Eric had run a game over Christmas vacation with a couple of the campaign's alumni, and that had convinced him to run the campaign itself, but simultaneously, Anthony, a friend of the previous GM, had agreed to chip in until a new GM was found, and had done some prep work. They came to a compromise and alternated their games until Eric was completely phased in. Because Eric was to become the permanent GM, Anthony worked with him on plots, sometimes to the point of basically running the other guy's scenario wholesale. Eric's strength is to bring out the best possible role-playing in the players, pushing them to respect their character sheets and past characterization, but he does have his quirks, including a propensity for NPCs that take a lot of room, and sometimes-outrageous descriptions of violence. The group decides to meet twice a week instead of just once, to keep the game's momentum going and make for shorter engagements. At this time, the role-playing club they are all members of starts a kind of "Iron Chef" tradition that requires each campaign to include some random element which the various players can then compare. This season, for example, all GMs are to include a Concorde jet airplane. With Janet playing an airline stewardess, that should be fairly easy, but Eric will never be comfortable with the club's interference in his games. Discomfort will soon become frustration...

The Characters
-The game needs a new Doctor and Peter has volunteered. His Doctor will be quite a bit younger than the last, trading eccentricity for youthful energy. He's looked at the previous Doctors' character sheets and decided to take some character traits from the older ones. So his Doctor will actually be a bit of an old curmudgeon in a young man's body. Inspired by the newly-available Frivolous Talent Trait for which he takes Cricket, he dresses his Doctor up in a cricketer's uniform, and finishes his drawing off with a silly detail, a leafy stick of celery on his lapel. When he tries to erase it later, the GM tells him not to and that it'll become important some day. Promises, promises.
-Matthew was having fun with Adric when it was just him and a couple of Time Lords, but with four players at the table, he's antsy, impatient when it's not his turn, and he uses those feelings to make his character misbehave. He takes up a lot of room, usually at the more timid players' expense (read: Sarah). He's not happy and the GM isn't happy either, so Matthew agrees to leave before the season ends.
-Sarah's Nyssa isn't just a victim of Matthew/Adric's need for attention, she also misses a few sessions, unsure whether she should continue with the game. After all, her skill set overlaps widely with the Doctor's AND Adric's. She often finds herself building some gadget or babysitting NPCs while the more Impulsive characters get on with the action. At this point, she's mostly staying on not to leave her friend Janet alone with a couple boys.
-Janet's still trying to find Tegan and vacillates between "get me home" and tantrums (when Anthony GMs, mostly), and helpful and resourceful (the character Eric helps bring out of her). Eventually, what's left of the former characterization is a difficult relationship with the Doctor, something akin to an old marriage. In reality, it's all fun and games and no indication of the players' own, teasing, relationship.

Castrovalva. Chris, the previous GM, had left some notes to the incoming GMs about the Master's ultimate plans in the Season 18 finale, so Eric decided to start with that, though he did insist on giving Peter room to build his Doctor in actual scenes. To everyone's delight, Peter was quick to create a crew out of his group, giving each of them a role and promptly going into a regenerative trance to give THEM the spotlight. Having only played with Tom, none of them were expecting this kind of generosity! The adventure itself was based on some of Escher's prints (this is what sold Eric on continuing Chris' story) and the idea was to use those pictures in play. It worked out well. Eric also decided the new Master, still somewhat of a blank slate, would be a master of disguise and felt strongly that this would allow him to use the character more often. 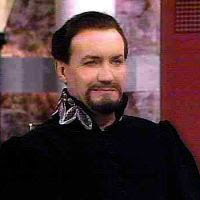 Four to Doomsday. One of Anthony's prepped scenarios came next, a strong science fiction tale about aliens who converted themselves (and humans they'd taken at different points in history) into androids to endure centuries-long voyages through space. Anthony researched the captive cultures and presented some music and dances from those cultures on You-Tube, setting some scenes to these performances. Interesting, but the most memorable bit was Peter using his characters' Cricket skill in zero-g!

Kinda. Eric's next adventure module took equal inspiration from zen Buddhism, Genesis and Heart of Darkness, giving Janet the opportunity to flesh out her character in dream sequences where she is tormented and ultimately possessed by an evil entity called the Mara (he let her play an evil Tegan too, which was pretty fun). This was the story Sarah missed, but Peter and Matthew got to meet a variety of crazy characters (some literally). They won't soon forget the sight of the GM playing with cardboard characters with a demented look in his eyes. Between this and Castrovalva, the players show they're at their best figuring out solutions to conceptual and abstract problems. Eric doesn't realize this, however, or else he'd have avoided some of the more techno plots to come. 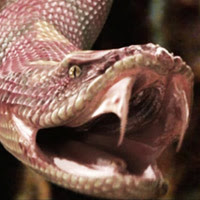 The Visitation. Anthony's last full game is one he worked out from Eric's suggestions - reptilian aliens who attempt to weaponize the plague and in a bit of railroading, cause the Great Fire of London in 1666 - and it even features a guest player who's a friend of Eric's, Michael. He plays an actor/highwayman called Richard Mace, who's more Falstaff than Robin Hood, and he plays it big, often standing from the table to make his declarations. Five players at the table is exactly the kind of thing that makes Matthew sting, and poor Sarah sends Nyssa to work on boffinery in the TARDIS, making occasional rolls while everyone else gets to play real scenes. Being polite, Peter has the Doctor invite Richard Mace for a trip in the TARDIS, but inwardly sighs with relief when Michael declines. 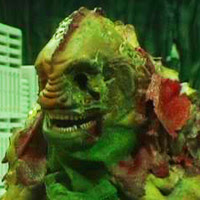 Black Orchid. Eric returns as GM with a short adventure inspired by the Doctor's cricketing, and it's certainly amusing (for a while) to use DWAITAS for sports. The other characters enjoy a masquerade, and poor neglected Nyssa has a double in fancy dress, giving her something to play. Plus a pulpy little murder mystery. It's around this point that Peter starts showing "proof of TARDIS" as a way to pacify the authorities.

Earthshock. Anthony and Eric collaborate on this Cyberman story, but Eric does the bulk of the writing and GMing. See, it's an important one that should have ended with Adric's return to E-Space. However, Matthew sees an opportunity to die a hero instead and takes it. It's his best game, and seeing as the players sort of spent time pursuing a red herring - a throwaway reference to fossils in the cave they arrive at - the GM throws in a time-displaced prehistoric crash that makes Adric responsible for the death of the dinosaurs. Someone might want to tell him his Cybermen are really quite emotional, but no one involved in the game knows any better. Almost jokingly, the group takes a moment of silence for their fallen comrade and Matthew leaves the group with no ill feelings.

Time-Flight. Oh damn, Eric completely forgot to include a Concorde in one of his scenarios, so here it is. Instead of having the TARDIS materialize in the Jurassic era, he sets the first episode at Heathrow airport to include the famous plane. It's a neat fix that allows Tegan to actually play her stewardess skills. Making good on his Master of disguise concept, he reveals the strange conjurer at the heart of the story as the Master, but there's no real reason for it, and the cheat eventually derails the story entirely. No one's sure what's going on except when they make Knowledge rolls and get fed the information. Look, it's the end of the season and everybody's a little tired, right? In the final, rushed moments, Janet has her character wonder if she should rejoin her interrupted life, and Peter has the Doctor run off with Nyssa before she can board the ship. WAS SHE going to leave the group? It's an example of the players toying with their GM. Janet plays coy all through the hiatus; she has every intention of returning.

But that's a story for another day...
Doctor Who RPGs Seasons of DWAITAS