October 15, 2013
On the occasion of completing reviews on the 1988 season of Doctor Who, I should like to re-imagine it as a role-playing game campaign using Cubicle 7's Doctor Who RPG. (Go back one, to Season 24.) 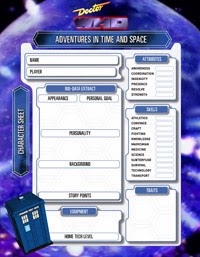 Andrew and Sylvester haven't wasted their gaming hiatus and they've come up with a number of interesting notions about the latter's Doctor, something that really fuels Andrew's imagination. One of the things they agree on is that the Doctor should be more proactive. To do this, the GM collects a few suggestions of what Sylv's Doctor might want to do and how he might go about it. Andrew designs a couple scenarios using those elements, but adding a lot of complications so it remains a challenge. Another way is for Sylvester to spend Story Points more liberally to change elements in the game so he can say the Doctor had planned it that way all along. And of course, Sylvester can also hint at playing a longer game even when he's improvising his butt off. (For other tweaks made to the Doctor character, see The Characters.) Andrew isn't abandoning the whimsical comic book elements he introduced in his previous season - he had too many ideas left over - but he'll mix and match with the darker direction they both want to go in.

The Characters
-Sylvester phases out the more clownish aspects of his Doctor throughout the season to make it clear it's really an act, though he still makes use of all the abilities he gave the character (especially Craft, which most use as a dump stat). He and the GM have also agreed to make the character more mysterious, so he drops a variety of hints to see if the GM wants to explore those further or to confound his companion. Things like maybe the Doctor is older than we think and knew Rassilon personally, or that he will eventually have to go and do things that seem to already have been done. And he uses Story Points to expand on the Vortex Trait and play on what a Time LORD might actually be capable of. To his delight, the GM is game for most of it.
-Sophie too has had discussions with Andrew and both really want Ace to have a character arc. What was the time storm that brought her to Iceworld? Who was she before? Is she really an orphan? And where is she headed? Whenever she mentions unease about something in the game, the GM jumps on it and tries to make her face her fears and anxieties. And Sylv is helpful too, having decided he would actually play "Professor" to Ace so she could grow her Science and Knowledge skill in addition to her more action-oriented abilities.

Remembrance of the Daleks. One of Sylv's ideas was that the Doctor might put an end to the Daleks and that "maybe he has a Gallifreyan artifact that he'd 'let' the Daleks have, but it's a trap and it blows them up". Noting that this was to be the 25th season of the campaign, Andrew decides to go back and look at old notes, and sets that story where the game started, in 1963 and Coal Hill School. He throws in the two Dalek factions where the previous GM left them, makes them more fearsome with new features (flight) and designs (the special weapons Dalek, the battle computer), and even creates a proto-UNIT group to help the Doctor, which is perfect because they've got a guest player in Pam. She's perfect as the group's science adviser Rachel Jensen, more or less built from the old Liz Shaw character sheet. Things go well, Davros shows up, and Skaro itself is destroyed. This new mastermind Doctor could be a hoot to play! 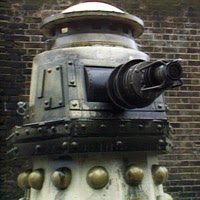 The Happiness Patrol. Andrew had used elements of West End Games' Paranoia RPG in his previous season (in Paradise Towers), and he returns to that well (and draws a lot more water) with this dystopia where it's forbidden to feel unhappy. It's ridiculous, of course, and he takes it even further with an evil torturebot made of candy. Go broke or go home, eh? This is a case of the Doctor not having an agenda going in, but Sylvester later acting like he'd come there knowing he'd topple Helen A's regime. It makes Sophie a bit paranoid, and Sylv chuckle. 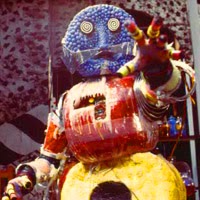 Silver Nemesis. Back to a plot suggested by Sylvester. What if the Doctor hid something in a comet and it returns to Earth and everyone wants it, including the Cybermen, and the Doctor lets them have it and it destroys them? Prepared in a hurry after an especially busy couple of weeks, Andrew fails to notice this is essentially the same plot as Remembrance, but that's because there are so many different elements. He has Nazis and time-traveling Elizabethans, and statues of living metal... Well, it seemed like a different story!

The Greatest Show in the Galaxy. And back to whimsy, with a rather experimental scenario about a Psychic Circus run by Lovecraftian gods hungry for entertainment. Sophie plays up a fear of clowns (pretty common), which the GM dutifully lets her explore, while the Doctor uses his Craft skill in one of the strangest climaxes any of them have ever participated in. Andrew more or less bases his characters on archetypes and gives them names that could come out of comic books, and it makes the players wonder if his choices have some hidden meaning. After all, THEY'RE always hungry for him to entertain THEM (even if role-playing is more of two-way street than the Circus is). He's not saying, though.

Having defeated gods from the Dark Times, the players and GM take a rest until the next season where those elements that most fired up their imaginations (the manipulative stuff) will take center stage...
Doctor Who RPGs Seasons of DWAITAS