November 15, 2010
Amalgamondays continue! This little experiment in superhero fighting of mine reschedules DC vs. Marvel and puts some real stakes on the BBQ. All Amalgams from any given series see their constituent parts go at it, and the cumulative winner gets to publish those constituents' series. This week, we're looking at Bruce Wayne, Agent of SHIELD. Now, Batman already got a win in Round 3, so he's safe, but what about his supporting cast? If DC wins, they can publish Robin, Nightwing, Batgirl, et al. If Marvel wins, it can publish SHIELD (and Secret Warriors). Note: Green Skull (Luthor/Red Skull) was decided in Round 2 and will not reappear. 2nd note: Nick Fury and Sgt. Rock are not amalgamated, but ARE paralleled. 3rd note (last one I swear): Some of the information comes from the Amalgam trading cards. 4th note (because my word means nothing): And a personal one at that... some of the Marvel-produced Amalgams don't quite get into the spirit of things, either not amalgamating certain characters at all, or using their original names instead of finding a cool (or silly) new porte-manteau. 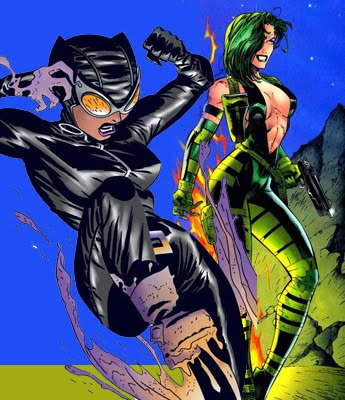 Catwoman pros: Slinky, oh so slinky. Especially, but not exclusively, as Julie Newmar. Excellent burglary skills. Cat lover. Batman's one true love. Has had her own critically-acclaimed series despite being a "villain".
Catwoman cons: Those Jim Balent days when she had to bend over backwards just to stay upright. Talia went and got herself pregnant with her man, that skank.
Viper pros: Controls her own branch of HYDRA. Works on the world stage. Once blackmailed Wolverine into marrying her. Venom-filled canines.
Viper cons: Horrible disfigurement limits her hair styles. Raised by Commander Kraken (i.e. other kinds of scars). Has employed Boomerang.
Win: Hard one. On the one hand, Catwoman is the most iconic character, but the Viper is used to fighting the Avengers, the X-Men and the Sub-Mariner. With the whole of Hydra behind her, both with personnel and technology, Viper would have that particular kitty cat on the run. Selina is just out of her element, and loses at least one of her lives to Madame Hydra. 1-0 Marvel. 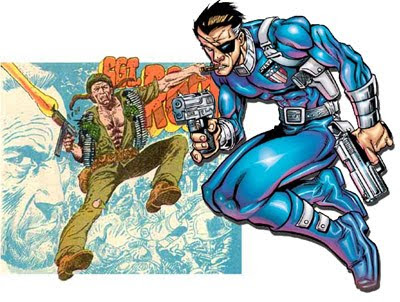 Sgt. Rock pros: Bar none, the most iconic World War II G.I. hero. They don't call him the Rock for nothing (nor solely because it's his last name). Joe Kubert.
Sgt. Rock cons: Easy Company doesn't have the best of disciplines. Schrodinger's fate - either he died from the last bullet shot in the war (awesome) or he survived to become Luthor's Chief of Staff (not awesome).
Nick Fury pros: Long-lived soldier turned awesome superspy. Lots of crazy gadgets and the whole of SHIELD behind him. Jim Steranko
Nick Fury cons: Smoker. Depth of field. An evil brother. A best friend called Dum-Dum.
Win: There's no one tougher than the Rock, and soldier to soldier, I have no doubt he'd win this thing by sheer will alone. Against superspy Nick Fury, however, I'm afraid he's just outgunned. 2-0 Marvel. 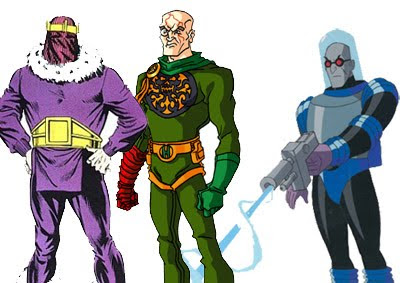 Mr. Freeze pros: Freeze ray. A motivation that tugs at your heart strings. Inspired Paul Dini's best work.
Mr. Freeze cons: Shares his name with a tasty cold snack. Became an awful pun-spewing machine in Arnold's care.
Baron Zemo pros: Having your mask stuck to your face approaches a Luthor-like level of secret origin zaniness. Killed Captain America and Bucky...
Baron Zemo cons: ...but not permanently. How does he eat? Filthy Nazi in a pink hood.
Baron Strucker pros: One-sided heat vision. Badass leader of HYDRA. Bonded to death spore, allowing him to recover from mortal wounds. Killed a lot of filthy Skrulls during Secret Invasion.
Baron Strucker cons: Filthy Nazi with bad eyesight in only one eye. Now claims he's no longer an orthodox nazi - everyone hates a flip-flopper, dude.
Win: Mr. Freeze is the real powerhouse here, icing up Zemo in the opening seconds of the fight. But Strucker's got that laser monocle and he doesn't die easy. Freeze is caught with his fridge-suit down when Strucker escapes from icy death and hits the poor guy in the back. 3-0 Marvel. 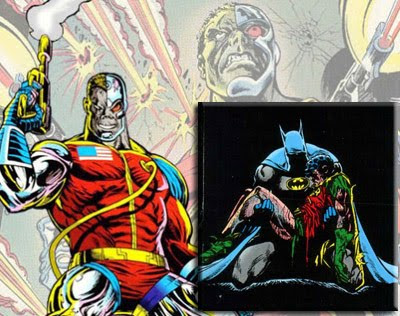 Win: There was this phone line, see? And we got to call in who we wanted to win this fight. 4-0 Marvel (uh-oh). 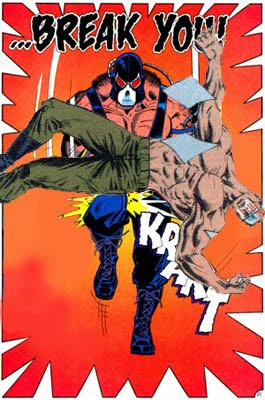 Bane pros: Once broke Batman's back. His brand of Venom unlikely to get its own 1990s series. Member of the ultra-cool Secret Six.
Bane cons: A bad Mohawk. Trying to beat his addiction to Venom. A strange relationship with Scandal Savage.
Nuke pros: Frank Miller creation. Vietnam vet. The Avengers may be required to bring him in.
Nuke cons: Pill popper. An unsightly, if patriotic, tattoo.
Win: A very close fight, with both guys high on high-tech adrenalin. It's anybody's--SNAP!--oh. Oh well. 4-1 Marvel. 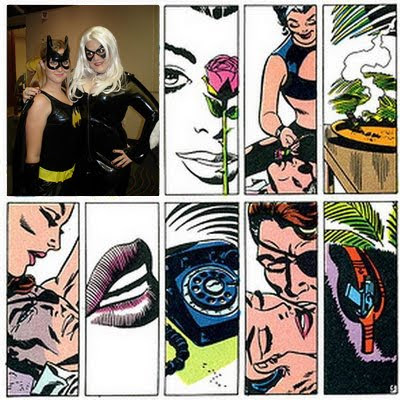 Batgirl pros: Will later become Oracle. Red hair. Utility belt - no purse!
Batgirl cons: The Joker knocking at her door.
Black Cat pros: Spider-Man and Puma's hot girlfriend. Bad luck powers.
Black Cat cons: Should have been amalgamated with Catwoman. Retconned into a rape victim. That hentai Heroes for Hire cover.
La Contessa pros: Nick Fury's smokin' hot girlfriend. Will judo throw anyone making untoward comments about female agents.
La Contessa cons: Smoker. Replaced by filthy Skrull.
Win: Is it a cat fight, or a bat fight? Well, while Valentina and Batgirl are fairly well matched, it's the unlucky kitty that throws a spanner in the works. Batgirl breaks a heel and La Contessa gets a lucky punch in at the same time. 5-1 Marvel. 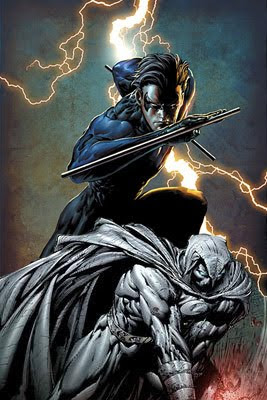 Nightwing pros: Will become Batman, and not in an Azrael kind of way. Incredible acrobat. Was hot and heavy with Starfire.
Nightwing cons: A Blüdhaven apartment. That George Perez-designed costume with the gold on it. The ponytail.
Moon Knight pros: The cool Egyptian look. Is the Fist of Khonshu. Made stronger by a werewolf bite. Adamantium weapons.
Moon Knight cons: Affected by phases of the moon. Suffers from multiple personalities disorder. Quoth Spider-Man - "Moony. Rhymes with looney."
Win: Both guys have had a number of identities, looks and modus operandi, but it's not a fashion competition. They go at it all night, but is the moon full? I don't care, because Nightwing is clearly the most untouchable, stable fighter of the two. He leaves Moon Knight in a crater. 5-2 Marvel. 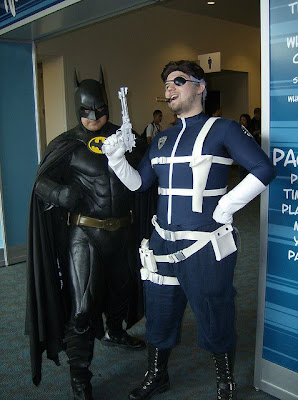 Win: Both are coming off a win when they meet. Batman's creamed Wolverine, and Fury's beaten Sgt. Rock. No small feat either way, but the Bat has just as many gadgets as Fury does, plus lots more besides. If you don't think Batman's gonna exploit the eye-patch situation, you need to read more Batman comics. 5-3 Marvel.

Well, looks like Marvel took an early lead and DC's big hitters weren't able to come back from behind. Round 4 goes to Marvel (2-2 overall), and they get permission to continue publishing SHIELD-related comics, including anything with "Secret" in the title. Good, because I'm loving Hickman's work on both SHIELD and Secret Warriors. DC, however, loses their publishing rights on non-Batman Bat-Family stuff, including Red Robin, Batgirl and Gotham City Sirens. I'm none too happy about that, believe me, but them's REAL STAKES!!!

Which Amalgam series (from the first run) do you want to see fight it out next week?
Amalgam Batman Comics

Siskoid said…
You're in luck, that one's been done.

chiasaur11 said…
Gotta disagree on one of the scraps here, if'n nobody minds.

Fury's a tough guy, but c'mon. The Rock took on more tiger tanks with SMGs than the entire Eastern front.

Both Fury and Rock were smokers, men of their times an' all. Secondly, Easy Company looked like a model unit when compared to the Howlers.

Sure, they cracked wise and didn't send kids when they seemed to be a couple years underage, but they managed to wear helmets and use guns, something Fury's unit seldom remembered.
November 15, 2010 at 4:45 PM