The Dark Claw Strikes Back

November 08, 2010
Having linked to my take on DC vs. Marvel "done right" last week, I kicked myself for not continuing with the series. Let's put in another chapter. Here then is Round 3 featuring characters amalgamated in Legends of the Dark Claw. The stakes: Retaining the right to publish Batman comics (for DC) or Wolverine comics (for Marvel). Them's big stakes! In Round 1, DC lost the right to do Deathstroke and Catwoman comics (Marvel keeps Daredevil and Elektra), while in Round 2, Marvel lost the right to do Captain America (DC keeps doing Superman). So that's 1-1, if you're keeping score after all these years. Who's going to take the lead today? 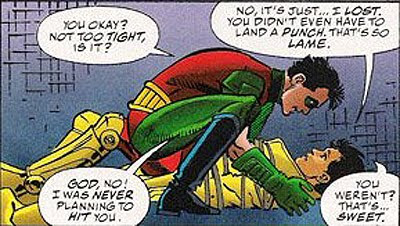 Robin pros: This is Tim we're talking about. First Robin to get his own series. Beat Jubilee in DC vs. Marvel.
Robin cons: The gay jokes. Burt Ward always saying he's not the real Robin behind his back. Damian gunning for him.
Jubilee pros: Played by Heather McComb in the tv movie, and Kea Wong in the films. Uhm... I got nothin'.
Jubilee cons: Out-dates Vibe as a late 80s-early 90s fashion nightmare. Mall rat meant to connect to the core audience. Her mutant power is to create fireworks.
Win: One of the fights DC vs. Marvel got right. Robin out-everythings Jubilee and takes an early lead. 1-0 DC. 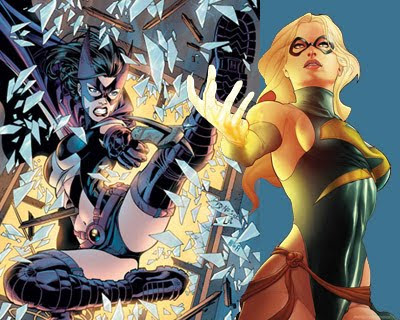 Huntress pros: The mini-crossbow. Daughter of a mafioso who made good. Silky dark hair. In another reality, the Batman's daughter.
Huntress cons: Anger management issues. Sometimes mistaken for a Star Sapphire.
Ms. Marvel pros: Grew from a non-powered supporting role in 1968 to Marvel's #1 heroine today. If you like Rogue, at least 50% of that is liking Ms. Marvel.
Ms. Marvel cons: Was once Binary. Sexist name.
Win: Huntress is a total badass, but she's just not in the same league as Ms. Marvel. Crossbow bolts bounce off her impressive chest, and Huntress gets pinky-flicked into unconsciousness. Marvel ties it all up! 1-1 all. 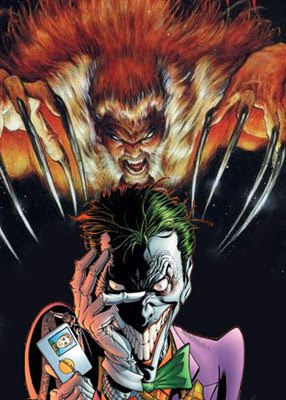 Joker pros: The Killing Joke. Smilex. Always reinventing himself. People will forever be fighting over who made the better Joker - Cesar Romero, Jack Nicholson, Mark Hamill or Heath Ledger.
Joker cons: Many people don't like clowns. Harley Quinn keeps putting embarrassing messages on his Facebook page.
Sabertooth pros: Wannabe Wolverine.
Sabertooth cons: Wannabe Wolverine.
Win: When IGN ranked comic book villains last year, the Joker came in at #2 and Sabertooth at #44, so clearly, if this were decided as DC vs. Marvel was, the Joker would win. It's not, however, it's a real fight... Well guess what. The guy who's gone up countless times against the Batman is gonna smilex the hell out of Weapon X reject Sabertooth. Brains over brawn. Joker's laughing all the way to the finish line. 2-1 DC. 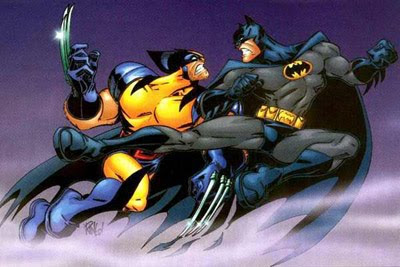 Batman pros: Even when he's not the "goddamn Batman", he's the "goddamn Batman"! Can hold his own with the JLA. The uncanny ability to come back from the dead/a broken back/prehistory/the camp 60s.
Batman cons: George Clooney. Once or twice started the Outsiders.
Wolverine pros: Is the best at what he does, and what he does is be featured in tons of Marvel titles simultaneously. Cool claws. Can regenerate from anything. Samurai training. Hugh Jackman's Oscar Night song. Canadian.
Wolverine cons: That solo movie. Overexposure. Should totally NOT have won against Lobo. Leaves hairs all over the bathroom fixtures.
Win: Tough one, but if you think Batman didn't come prepared to a fight, you're sorely mistaken. Wolverine didn't even know what was coming. Now he's regenerating like crazy in the Bat-acid bath. Forever. 3-1 DC.

And that's how DC wins the third round (2-1 in their favor overall), and how Marvel loses the right to publish a Wolverine comic. Which still allows Logan to show up in dozens of books with other titles. I doubt it'll affect their sales much. If you want to blame someone, Wolvie fans, blame the lameness that is Jubilee and Sabertooth.
Amalgam Batman Comics X-Men

Anonymous said…
How can you write about a Batman-Wolverine fight and not make a Prestige reference?
November 9, 2010 at 5:17 AM

Siskoid said…
Now if these two had been put to the vote, it'd have been a real contest. DC and Marvel were pretty careful to gauge the characters' popularities so they could guess the winners in advance.
November 9, 2010 at 11:40 AM