December 06, 2010
More from Amalgamondays as DC vs. Marvel Phase II proceeds apace. The rules, once again: All Amalgams from any given series see their constituent parts go at it, and the cumulative winner gets to publish those constituents' series. This time around, we're looking at both Amazon and Bullets & Bracelets. The former only really had one Amalgam (Storm/Wonder Woman) and yet Diana was also alive in the latter. I've combined them and the results will decide if Marvel can continue publishing Punisher comics, or if DC instead retains the right to do Wonder Woman. Let's get ready to rumble!
Current score: 4-3 DC
The proof: Round 1 - Round 2 - Round 3 - Round 4 - Round 5 - Round 6 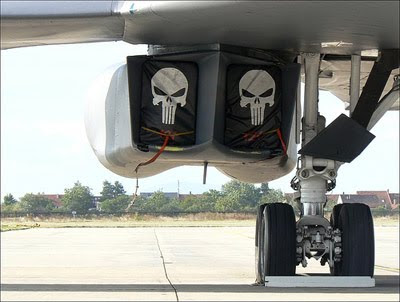 Win: BAM! Trev's dead. (Ok, not really. The Punisher wouldn't kill a non-criminal. But between the WWII Air Force ace who crashed his ass on an island in the Pacific, and the Vietnam/Gulf vet who has mowed down more criminals than the U.S. penal system currently holds, my money's on the latter to at least knock out the former.) 1-0 Marvel 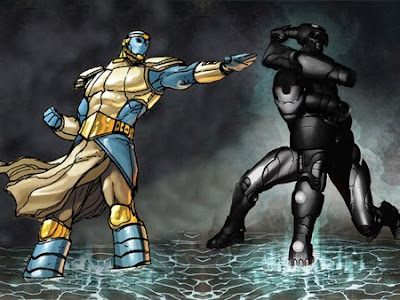 Monarch pros: Depends, who is he this time? Was supposed to destroy all the superheroes in 2001. Currently has the combined power of many Captain Atoms.
Monarch cons: The lame, last-minute, eye-color-changing identity switch from Captain Atom to Hawk.
War Machine pros: Used to be the sober Iron Man. That big spinning machine gun. Stark ingenuity and design. Only ever played by Academy Award nominees.
War Machine cons: Copyright entanglements with the UFC. Stark can't spring for a paint job?
Win: I sooooooooo want Monarch to lose this one, but if he could down a number of Supermen and Wonder Women in fewer panels than the original DC vs. Marvel took with each of its fights, War Machine isn't in his class. Though Monarch wears armor, he's got quantum powers coming from within. As soon as Rhodey jumps a breaker, he's done for. Probably before then. 1-1 all 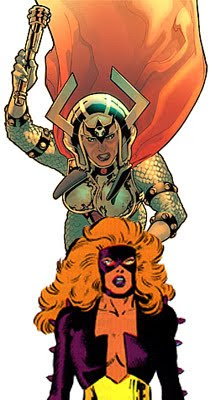 Big Barda pros: New God. Trained as a Female Fury. As strong as Wonder Woman. The Mega-Rod. Her heart can only be melted by Mister Miracle. Loosely based on Jack Kirby's wife Roz.
Big Barda cons: Is called Barda. In light of the last "pro", that time John Byrne made her make a porno with Superman. Doesn't like Scott's idiot JLI friends to come over.
Titania pros: Fun to say. Second in female strength only with She-Hulk. True identity a tuckerized version of production assistant Mary McPherson. Wife of the Absorbing Man. Cancer survivor.
Titania cons: Bully. Phobic about Spider-Man. No health insurance.
Win: Another uneven match that shows the two universes don't really use the same power scale. Marvel is far more "street level", while DC deals with "cosmic level" characters more regularly. Barda IS a New God after all, and Titania, a B-level crater in the street at best. 2-1 DC 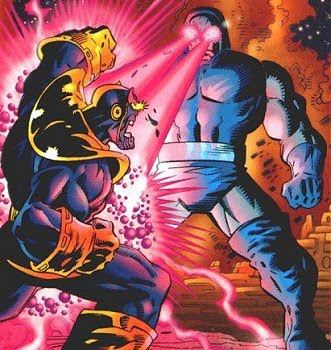 Darkseid pros: There is no bigger bad in the DCU. The Omega Beams. The Anti-Life Equation. The whole of Apokolips at his command. Based on Jack Palance. JACK PALANCE!
Darkseid cons: Bad dad. A name too many people pronounce Darkseed. Terrible complexion.
Thanos pros: Death's lover. Frequent access to the Infinity Gauntlet. Cosmic powers.
Thanos cons: Derivative (Starlin admits to being inspired by Kirby's New Gods). Unhinged.
Win: The two powerhouses could lay waste to a good chunk of our galaxy while duking it out. Hard to call, but Darkseid is used to playing the longer game. He sends waves of Parademons to distract Thanos, while he quietly plots to Omega Beam the heck out of whatever Soul Gems Thanos currently has his mitts on. Those beams'll find you no matter where you are, and usually at the moment when you're flipping out because Death is sending you mixed messages. 3-1 DC 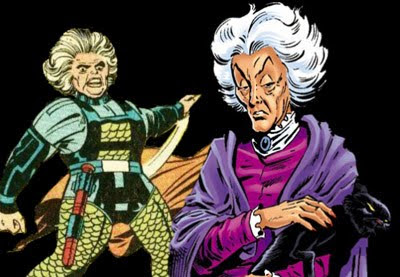 Granny Goodness pros: Young Granny Goodness was a fox. Big and strong. Scott Free's nanny. The genius of Ed Asner's voice.
Granny Goodness cons: Old Granny Goodness is a hag. Abusive mother. Single-minded in her nannying.
Agatha Harkness pros: One of the original witches of Salem. Franklin Richard's nanny. Mentor to the Scarlet Witch. Her familiar, Ebony, turns into a panther.
Agatha Harkness cons: A disowned evil son. Kind of frail.
Win: On the one hand, Granny let Mr. Miracle slip free of her orphanage. On the other, Agatha kept boy-god Franklin Richards safe and in check. But this isn't a nannying competition, it's a fight! Granny sure didn't expect all that magic to come out of that skinny old lady! 3-2 DC 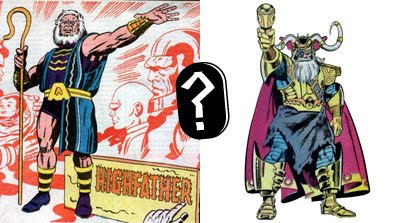 Highfather pros: Highest God of New Genesis. Tamed Darkseid's son Orion. Reads the Source's burning messages.
Highfather cons: Taken down by Ares and replaced by Takion, of all characters.
Odin pros: Highest God of Asgard. Strict disciplinarian. The Odin Force can be used for just about anything, including turning a disobedient son into a mortal. A couple of crows for spying, and an 8-legged horse for riding.
Odin cons: Lost an eye (so it's no longer fun and games up in Asgard). A 24-hour Odinsleep once per winter. Ragnarok has him dying in the maw of the Fenric Wolf.
Win: Unless Highfather brings the Fenric Wolf, it's not looking good for the New God. He's really no fighter, and Asgard's All-Father is warrior through and through. Old Izaya ends up spiked on the end of Gungnir, I'll tell you that much. 3-3 all 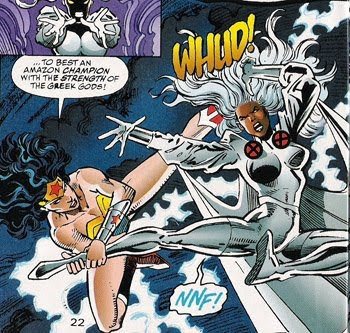 Wonder Woman pros: A warrior (for little boys) AND a princess (for little girls). Feminist icon despite the costume. Linda Carter. Can give Superman a run for his money. The lasso of truth. The bracelets of bullet deflection. Diplomatic immunity.
Wonder Woman cons: All that bondage stuff from the 40s. Famously difficult to write for/keep publishing. JMS. Invisible plane jokes.
Storm pros: Power over the weather. Thief skills. Considered a goddess in her home country. Once led the X-Men.
Storm cons: Fickle about haircuts. Halle Berry. Had to marry the Black Panther, cuz you know, Luke Cage was taken.
Win: REMATCH! It's no secret that one of the most bogus outcomes from DC vs. Marvel was the Diana-Ororo match-up. If you'll remember, Storm hits Wonder Woman with lightning, zapping Diana into unconsciousness. AFTER Storm brushes off a kick to the head. Yeah, right. This time, the Superman-level warrior babe gets her due. As the storm clears, Diana stands over the prone form of one comatose "goddess". 4-3 DC

DC edges out at the very end there, meaning it must continue to struggle with the apparently unwritable, unsellable Wonder Woman title. Sorry Marvel, that Punisher cash cow is off the racks. Harsh, but you shouldn't have made me mad by having Storm win that fight all those years ago.

Overall score 5-3 for DC. Can they hold on to that lead?
Amalgam Comics Wonder Woman